After all our work and research, we now need to seek permission from the Headmaster to realise our idea of wrapping the playground. How will we do that? How can we persuade him? This online session was mainly discussion. We listened carefully and patiently to each other and we discussed the matter of PERMISSION.

Some suggested we could Beg him to PLEASE allow us to wrap the playground!

We also thought we could actually PERSUADE him by making an argument FOR him to support this. We discussed the fact that we might send him a formal letter to explain:

What we are doing

Why we are doing it

Why we think he should say YES!

Before the debate began we discussed the idea of ADVERTISEMENTS and how they are used to PERSUADE us to buy or like something. We looked at the language they used; lots of ADJECTIVES to describe things. We looked at the sorts of colours they used to ATTRACT us.

A new playground covering would confuse the younger P1 children

No hopscotch / no snakes and ladders for playing and learning …

There’s nothing wrong with the yard so why wrap it?

It would be good for school visitors

It would be a beautiful, extraordinary sight and look amazing, bright and cheery

It would cause a lot of interest maybe from the newspapers and television!

It would be MEMORABLE

It would be fun

No one else would have wrapped their playground!

All these great ideas could be used to write the letter to Mr Madine, the Headmaster.

I reminded the children of how CHRISTO and JEANNE-CLAUDE persuaded the authorities to allow them to realise their projects. Christo used documentation, plans and PHOTO-COLLAGES to show people what the idea would look like.

The children wanted to make their own photo-collages so Mrs Crummy gave out a black and white photocopy of a photograph of the school playground (some photographs taken from different angles, had been taken of the playground prior to the session and photocopied for each child).  I explained to the children that they should look at the SHAPE of the playground and cut out a piece of material or several pieces to stick down to cover that shape. I showed them a hot-collage I had made. I didn’t have a picture of their playground but I did have picture of Croke Park, Dublin from a visit a few years ago. Here’s my vision of a wrapped Croke Park Pitch! I explained how I had folded and creased the material to make the surface stand out:

The children used samples of fabric that we had used for testing to create their own vision of how the playground would look! 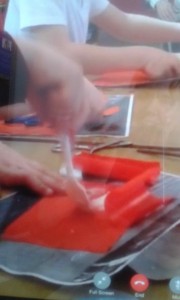 Look at the fantastic results! Thank you P2/3 for all the great discussions and photo-collages!