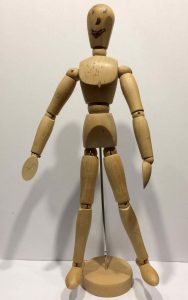 We began today with a close up look at an artist’s mannequin, whom we named ‘Poser’.

We explored all the different joints and ways the mannequin could be manipulated. We discussed all the ways which the body connects with each other. We named all the pivotal points and we counted 14 joints and we set ourselves the challenge of trying to move as many joints as possible at the same time and recreate a pose.

This was great fun and the children struck some interesting poses but Eileen, our classroom assistant surpassed us all by striking a sitting pose which had each joint assuming a different position.

Our first activity involved using the scribbled mass technique to make the shape of the body. We used graphite sticks to draw ‘Poser’ as a jigsaw made up of 15 separate pieces. We then cut out our jigsaw pieces and placed them directly onto sheets of coloured paper trying to make some of the poses which we had practised earlier in the session when we were exploring our joints.

The children made the pose on paper and then tried to imitate the pose which they had made. This proved to be both fun and challenging at the same time.

Sharon introduced us to Eadweard Muybridge, a photographer from the 19th century who invented a ‘gun’ which allowed still shots to be taken in quick succession. 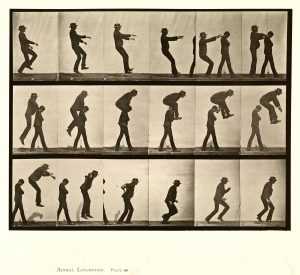 We also looked at some work by a French Scientist called Etienne Jules Marley who studied movement and documented animals and figures in motion.

We examined closely a picture showing a series of photographs of a horse’s hooves in motion. 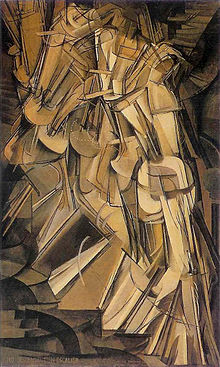 This painting provoked a lot of discussion amongst the children as we tried to make sense of it. It depicts movement and we could see the staircase in the background. The sense of the person in motion was decipherable but separating the actual staircase from the figure was difficult and I suppose this is part of the charm of the painting.

We then went back to our desks and attempted to draw again using the scribbled mass technique, a person in motion descending the stairs. The results were very impressive as the children mimicked the movement of the joints as would happen if they were to walk down the stairs. 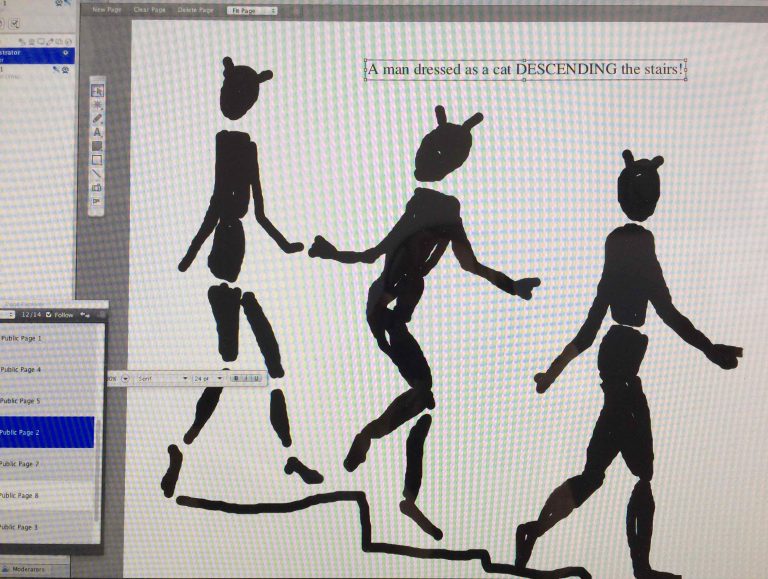