We began as always by reviewing our work from the last session via the Kidsown website. The children love to see their work (and themselves) up on the big screen. We looked at the way our bodies bent and moved to take different poses. Sharon  sent down two mannequins in the post so in two groups we shared the models and  looked closely at how we could make it do a simple move to see what stages are involved.

So we made the mannequin raise its arms up to wave! The children put the arms through various stages from arms hanging down by its side to raised full in the air. It took maybe 6 – 8 moves in total.

Eadweard photographed each stage and realised that if you saw each image quickly enough one after the other, you would think the object moved!

Sharon showed us  a simple flip book that her son had brought home as a souvenir from America when he was a boy. It showed King Kong in New York.

We then had a go at trying our own flip book – Sarah suggested making a snowball:
So we discussed how many STAGES will we need to make?

we used the post it notebooks for each child  –

Each child made their own flip book and we worked steadily through the book making each snowball bigger as we went along.

Creating and photographing a larger sequence…. a bare Christmas tree getting decorated?

Each child  drew a simple shape as decoration and cut it out then coloured it in or decorated it using chalk or pastel (not wet media). Using an iPad camera I took a photograph of the bare tree – then as each child stuck the decoration onto the tree I  took another photograph so I ended up with  27 photographs of the tree  at different stages of being decorated. 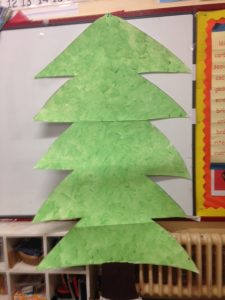 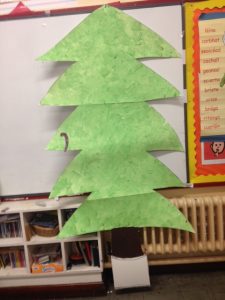 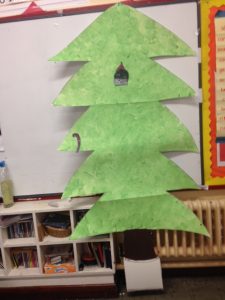 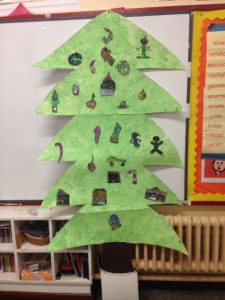 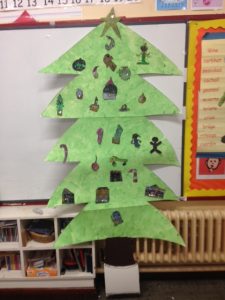 We were then able to put the photographs onto the IWB using AppleTV and flick through the camera roll. As we moved through the photos the tree appeared to be getting decorated.

The children then had opportunities to use the ipad themselves and play around with the idea of a moving image from still photographs.

We think we might like to explore this idea further so we are going to get in touch with the AMMA Centre in Armagh to discuss some ideas of how the children might make their own moving images.