We were delighted to welcome Sharon into our class today in the flesh.. And to move the project forward as our last session was before Christmas.

There was a great sense of excitement at Sharon’s visit. We began by chatting about where we had left off and our earlier attempts at animations. Sharon introduced the children to a beautiful animation which she had worked on in a previous project entitled ‘Rescue Me’.

The children were full of ideas about what the animation meant to them and we had some very interesting discussions around what it all meant. The children came up with the idea of drowning and falling into a boat and being saved. The ‘shed’ and the ‘tree’ were two very important aspects of the animation which the children kept coming back to in their discussions. The trunk of the tree morphed into the man’s body and this was fascinating as just this week in class we had done a family tree in religion as a part of our Grandparents Day celebration, as part of Catholic Schools Week.

There were also several recurring themes which the children seemed to agree on. The animation suggested to them feelings of loneliness, loss, life, a journey, danger, safety, sadness, depression, drowning and the idea of needing rescued and returning to the tree where they belong and feel safe. It reminded me of Julia Donaldson’s wonderful children’s story entitled ‘Stickman’ and the family tree.

The children were totally drawn in to the animation with the beautiful music to accompany them on the journey and their insights into the short film were intelligent and thoughtful.

We also discussed the practical aspect of working on such a project and how many drawings would be needed to complete a project like this. We chatted to Sharon about the TIME she had devoted to creating this fantastic animation which lasted approximately three minutes and took somewhere in the region of Three MONTHS to create. We were astounded at her patience and diligence to her craft.

Following our lengthy and thought –provoking discussions the children were provided with willow charcoal by Sharon and they had an opportunity to work with this wonderful art medium for the first time. Sharon also provided them with rubbers so that they could explore some of the techniques which Sharon had used in her animation ‘Rescue Me’, leaving a shadow of their drawing, giving it a ghostlike quality.

The children thoroughly enjoyed using charcoal as a medium and their work reflected the freedom with which they approached their drawings. The idea of the boat from the earlier animation stayed with a few of the pupils and they explored this in their artwork. The children became totally engrossed in their work and we had to ask them to stop drawing so that they could go for break!! 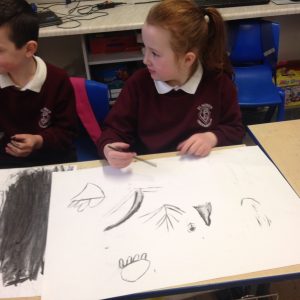 After break we returned to class and watched Sharon draw a crow using the scribble technique which we had explored in previous sessions. We had recently taken part in the RSPB Big Schools Birdwatch and the children had had some practice drawing a bird shape. Sharon had brought in two lifesize plastic crows which we used for our still life drawings. 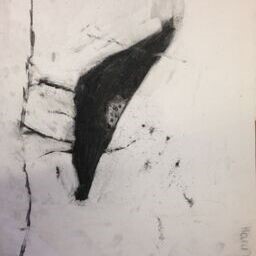 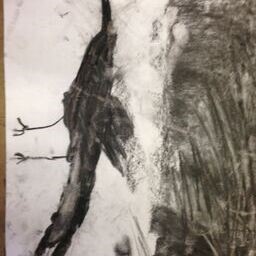 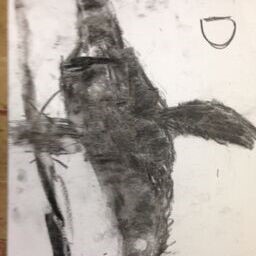 Having had a go at drawing crows, we then attempted to take this one step further and turn our drawings into an animation! We discussed how the bird’s wings move at take-off and landing as well as mid-flight and we attempted to recreate these series of movements by giving everyone in the class a different position to draw. The children had a bit of practice using their arms as wings and determining their positions that they would need for their drawings. The results were extremely effective and we photographed each drawing in sequence and put them onto the photo roll on the iPad. We were then able to watch our short animation on appletv which lasted around 3 seconds. It was wonderful for the children to begin to appreciate and to understand the work that goes into creating an animation from still images. It was indeed a very busy activity and we were trying to have our animation complete before the session ended so the pressure was on. The results were very impressive and the children were duly proud of their achievements. Siobhan’s work shows how she was able to draw the shape and size of the bird using the scribble effect, beginning in the centre and working outwards.

It was a wonderful session from start to finish having Sharon in the classroom and the quality of the children’s work reflected this.