Last September, my Primary 6/7 class were chosen to take part in the Kids’ Own Virtually there project. The Virtually there project is an innovative virtual artist in residence project … exploring the potential for creative engagement between artists working from their studio and children and teachers in the classroom using video conferencing technology (Orla Kenny, Director of Kids’ Own Publishing Partnership).

Our class were paired with artist, performer and composer, John D’arcy. John’s work focuses on the use of sound and voice in intermedia art events. As a primary school teacher, teaching children with special education needs, the art mediums that I tend to explore within the curriculum include drawing, painting, ceramics, printing and 3-D sculpture. The use of sound as an art form or event, outside of musical lessons and choir, was an intriguing concept that I was eager to engage with.

Throughout the course of the fourteen weeks the pupils explored natural and man-made sounds in a variety of different environments and locations. Initial sound explorations focused on our school environment and ranged from birds chirping, the wind howling to high-heel shoes walking down the corridor or the buzzing of the whiteboard and the hum of the lights. These discussions concentrated on getting the children to describe the sounds they heard and attempt to recreate them using their voice. Throughout the sessions the children began to show greater confidence and clarity when describing different sounds.

“How could you tell it that the sound was high-heel shoes? Can you describe the sound?

“It went clip clop … the sound was spaced apart … the sound was short and repeated … it was getting quieter as the woman walked down the corridor … it sounded like my Mum’s shoes in the kitchen.” 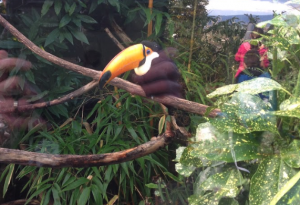 A toucan at the Belfast zoo 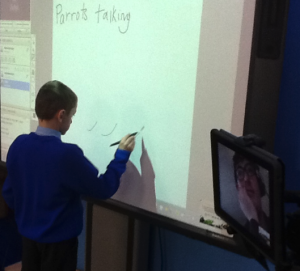 The parrots talking resembled a curved line to Kevin because the ‘sound went from low to high and it was a short sound’. 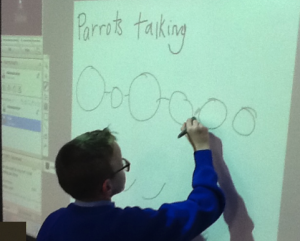 Daniel drew a series of circles of different sizes joined by lines for the sound of the parrots. The sounds ‘went from loud to quiet … it was like the parrots were talking to each other.’

“I was imagining the monkey making ‘oh, oh’ sounds, that is why I picked an O [to draw]. I drew a line because it was joining the sound together. I the red sound was an angry sound and the purple sound was a lower sound. 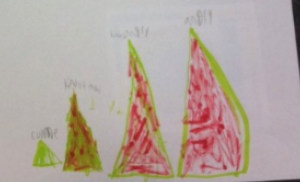 “I drew this shape because it looked like a parrot’s beak. The triangle is getting bigger as the sound is getting louder and angrier.”

The project continued to evolve developing drawings and sounds into graphic scores, which would later be performed and recorded by the children as an abstract musical performance pieces. The children’s confidence grew as they began to interpret drawings that John had given them as sounds.

A selection of the children’s sound drawings 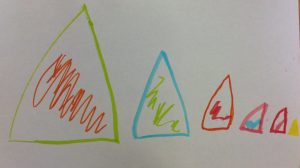 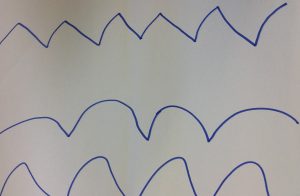 The children were then able to use the sound recording app Keezy, to record eight sounds and arrange them into an abstract sound piece or follow a graphic score that John had arranged. 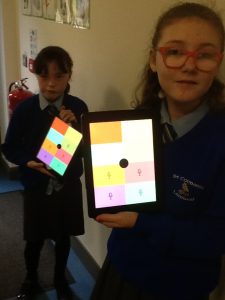 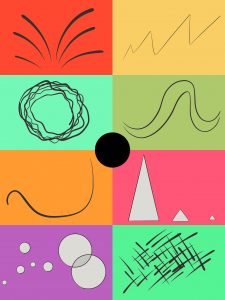 I overlaid John’s images using Photoshop with the Keezy sound board. The children had to respond to the image by recording a sound in that particular coloured tile. 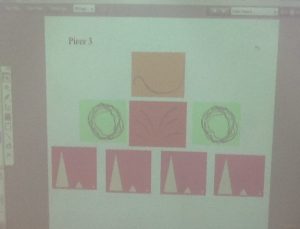 The children had to play the graphic score that John had created using the Keezy board images. 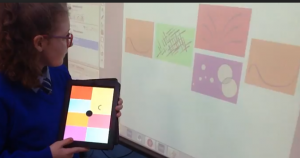 Throughout the project it was a delight to see children that were initially reluctant to take part in the performances and recordings began to grow in confidence and express themselves through sound, drawing and performance as well as being able to articulate their thoughts and descriptions with greater clarity. 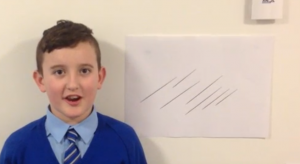 This was a fantastic and worthwhile project that the children loved. Thank you Kidsown!