Some changes had taken place since our last session – having travelled much further afield. I was no longer online from Belfast…..

I greeted the children, Miss O’Sullivan,  Orla and Vanya who had come to observe our activities. I posted some pictures of things I saw on the way from Belfast…. I travelled on south towards Dublin and……. Arriving at Dublin airport….. where after a while, I was airborne and flying….. One of the children guessed I had gone to England and they were right… and guessed that I had flown to Heathrow Airport / London and some children knew just how crowded and busy that was – but my journey did not end there!

I travelled on by airplane…. travelling in a westerly direction and flying for 8 hours…….. The children guessd that my pictures were very fuzzy because I was taking them while moving so they are out of focus and blurry. They also made guesses that I may be travelling towards America……. this was close, I told them and soon they guessed I was headed for Canada and  I was even told the capital of Canada was Ottawa!!!

However I was not landing in Ottawa, but another Canadian city – Toronto!

Here is the first sight I had of Toronto as I landed: We worked out that I left London at 6pm and arrived in toronto at 9pm!!!! The children guessed that there was a 4 hour time difference – until the clocks spring forward soon when there will be 5 hours behind Ireland.

I showed the class some pictures of what I saw when I woke up and had a look around the next day: 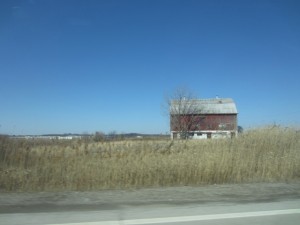 We talked a bit about where Toronto was  located. I tried to bring a link to google maps to show where exactly I am. So I am in  Oakville, which is close to Toronto and  sits on the very edge of  Lake Ontario. So I am in Ontario, Canada!

Lake Ontario is one of the 5 great Lakes on the USA / Canada border area.

The other 4 Great Lakes are: Superior, Erie, Huron and Michigan. here’s a few maps of the area and lakes. I asked the children to look at two pictures and to think about a famous Candaian food….. Once we thought about PANCAKES … we guessed that this had something to do with MAPLE SYRUP…. I had been to a Maple Syrup Festival and learned how the native Indians had shown the settlers how to make the syrup by syphoning off the sap from the tree into a bucket. The sap is thentaken and boiled and boiled and boiled until it has condensed to  leave a dark sweet syrup……. In modern days this process would be carried out using modern equipment, but in the olden days the people would use several cauldrons of sap boiling over a fire and this would be done outside for a  number of days.

Not only did I take photographs of my travels but I also kept a sketchbook. I drew as i left Belfast by car in the passenger seat til I was airborne and flying towards Canad when the sky grew darker and darker and I could no longer make anything out from the window of the airplane! 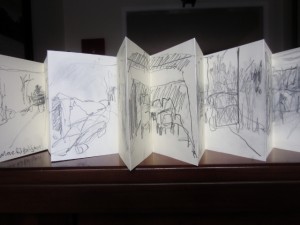 I was working on a small sketchbook called a CONCERTINA sketchbook, which has all the pages joined together and can open and close like a concertina! They all made their own record of a journey from classroom to outside playground. They recorded things very quickly that they saw on the way. Its different making fast sketches, yet the children returned with some really wonderful drawings…… Looking forward to our next session when we will be having a look at creating pictures using lots of  drawings and also photographs….. we had a brief look at an English artist David Hockney who created work using photo montage….