After a break we have resumed our project explorations and with great enthusiasm!

We have continued to explore the idea of TRACE and after a short recap of our last sessions before Christmas, we began a new exercise.. its one I try with adults when teaching drawing: to draw, to describe an object that is hidden from view, using only the sensation of touch.

This makes us really aware of our other senses beside seeing and can produce some  unusual results. First though, Mrs Carolan had suggested that the children use blindfolds

and other children could have their object hidden in a bag, so they would put in their hand and carefully feel the shape.

Then the children made drawings by looking at the object – then they compared both their drawings and we spoke about what they thought the object was, before they could actually see it see it; this was interesting as they used their imaginations.

We began to think about how else we could trace a shape and so discussed the idea of shadow shapes: I showed the children two photographs I had taken and posted on the whiteboard:

Mrs carolan had organized a number of torches for the children to try and capture the shape of a shadow. this was very tricky as it meant TEAM work!

So with the creation of a solid dark shape, I introduced the word ‘SILHOUETTE’, which is made by tracing the outline of an object and filling the middle, so it is a solid shape (usually black). Lots of shadows were created using torch light or the light from an overhead projector and the children had a go at tracing the outline and filling the solid shape in, so they had a silhouette!

During the morning break, we noticed that the sun was shining outside…. I suggested that the children look out for shadows shapes in the playground.

I was thrilled when the children returned to show me how they had taken a roll of paper outside to record the shadows they made! Look at these shapes of Caitlin’s long shadow and a shadow created by hunching down low. What great initiative!

We continued to explore shadow and silhouettes using the natural resource of the sunlight flooding in the classroom – due to the quick thinking of Mrs Carolan! And she was right, if we did not act quickly, the sun would go in and we would have no shadow! 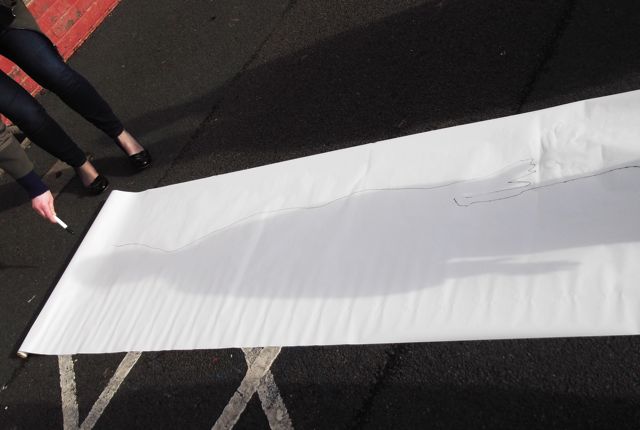 It felt really good to be spontaneous!

Some of the last shapes recorded were by Riordain and Finn., who with the help

of Catherine the assistant, made shapes with their hands to create shadow and drew round the shadow shape.

The children showed me the result and I said it looked like a monster shape! They said they thought it was a bunny and then named it Sam!

We look forward to our collaborations next week when I will visit the school in person! I promised to bring down a drawing that I made recently and that I had shown the children on the whiteboard – it is of the silhouettes of tree tops. When I am out running I like to take in the landscape and the sky and this drawing was made remembering this.